To the chagrin of marshmallow lovers, this is not a post about these guys:

Instead, I’d like to focus on three groups of people – the ‘maids, the ‘men and the munchkins. 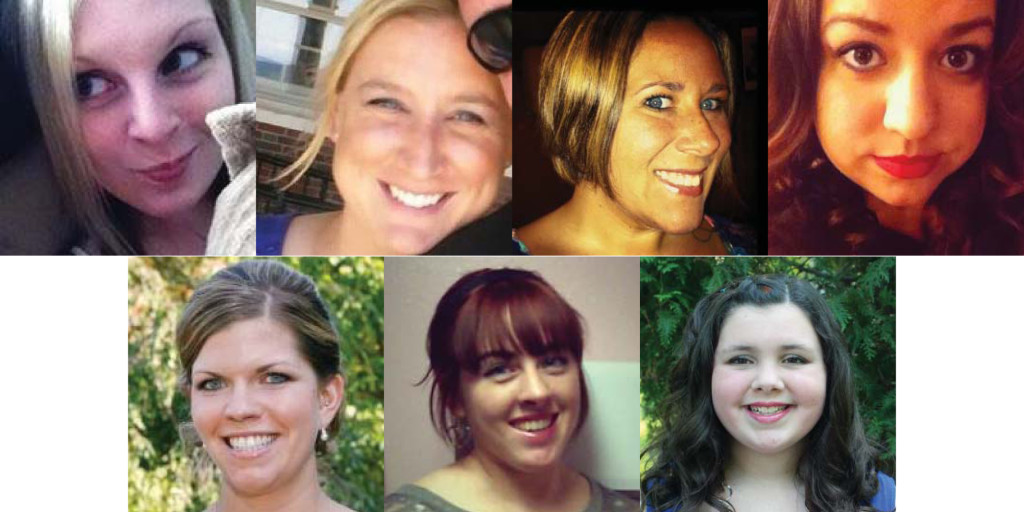 MOH Homegurl and I have been friends for the past 18 years and I couldn’t imagine her not by my side on my wedding day. She has been there for just about every guy I’ve ever crushed on. Let me tell ya, some of them were doozies, yet she loves me just the same. She is great about giving me a perspective I didn’t think of and is always willing to lend a helping hand.

MOH Sharpie is my cousin and has been there since the beginning (makes sense since she’s older than me). Out of five cousins on my mom’s side, her and I were the only girls and we hung out a lot. She’s been a huge support system throughout life and I was fortunate to be by her side when she got married. Sharpie is a new mom yet she still is willing to tackle MOH duties – bless her soul!

BM DW and I go back to when I started seventh grade and we even went to the same college together (Go Bulls!). Fall is our favorite time of the year because it means sweats and football – two of the best things ever. DW and I also enjoy the OC, Dancing with the Stars and making yummy food. She is the giraffe to my zebra.

BM Frack was my friend before she was my boyfriend’s/fiance’s sister-in-law. Even if I wasn’t marrying Mr. PB, I would still want her to be a part of my wedding day. It’s fantastic to have a future sister-in-law that you’re friends with and get along great with. We also both have a love for crafts, Grey’s Anatomy and cheese.

BM Nachos and I worked at the college student newspaper together and have some amazeballs memories together. She also shares a love for the WeddingBee with me and we talk about it frequently, but totally not in a creepy way. She lives in DC right now and I keep waiting for a phone call that she found a job in NY.

BM Cupcake and I met while I was doing an internship in Ohio and share a love for spontaneity, randomness and, of course, cupcakes. We know how to celebrate like princesses and heckle like rabid sports fans, maybe even both at the same time. Cupcake is another out-of-town bridesmaid, currently living in Ohio. Maybe one day I can convince her to move to the Empire State…

JBM Moo is my younger sister and like all sisters do, we torture each other from time to time but in the end, her and I are quite alike. Organization is something that brings delight to both of our worlds and we both love pop music, even though she is crazy when she says Justin Bieber is better than Justin Timberlake. Kids these days…

Mr. PB’s brother Gee will serve as his best man, just as Mr. PB was Gee’s best man in 2010 for his wedding. Also standing with BM Gee will be GM Gold, Mr. PB’s longtime friend by way of Gee; GM Honda, a friend and coworker of Mr. PB for the past six years; and GM Genny, a middle school friend of Mr. PB’s. My older brother Germany and younger brother Tubesock will also be groomsmen in Mr. PB’s crew.

Side note: I apologize for the brevity in the groomsmen synopsis. I somewhat awkward writing about Mr. PB’s friends and Mr. PB isn’t exactly the blogger type. (He’s currently in the other room, probably browsing Craigslist for things he doesn’t need.)

These kiddos may be little in size but they bring lots in personality, as shown by their photos. The flower girls are my nieces and the ring bearer is the son of my cousin aka basically a nephew in our family. I can’t imagine them being any more adorable than they already are but I have a feeling they will steal the show at the wedding. FG Princess talks to me about the wedding every time I see her. She knows exactly what she wants to wear, how she wants to have her hair, where she will stand during the ceremony and what she will carry down the aisle. I love her enthusiasm. Future wedding blogger in the making

Tallying up the bridal party, that’s seven ladies, six guys and three little ones – 16 total. When I planned imaginary weddings growing up (you know, to people like Justin Timberlake, obv), I always pictured everything even and paired off. Back to reality, it didn’t work out that way and I am a-okay with it. I love our bridal party, even if it’s considered to be on the larger side of things. I actually probably could have added a few more people but I had to draw the line somewhere. Well, more like Mr. PB drew the line.

Did your bridal party count turn out differently than you imagined? Will you have more than 10 people in your wedding party?

Themes are a plenty for weddings. Season themes can center around autumn leaves, winter snowflakes, spring flowers or summer sunshine. Geographic themes can highlight the architecture of the city, the food of a region or a faraway country. Themes can be based on decades, cultures, hobbies, occupations, fairy tales or a wide variety of things.

Many of people have asked us what our wedding theme is going to be. That’s a more complicated question than they realize. As shown in my Pinterest inspiration, everything from ampersands, sprinkles, sports nods and jewel tones have been on my mind during the early planning stages. None of those items seemed to wrap up into a theme I’ve heard of before.

I often tell friends and family members who are planning their wedding to come up with three words that they want their guests to think of about the wedding. So I tried this strategy to help with me defining my theme. If I had to choose three words, I would go with fun, bright and love.

I want our wedding to reflect us, the goofball, football-loving, kitty parents who have a large family, energetic friends and a ton of love for each other. I think the best way to describe it is love & sprinkles. We want our love to shine during the wedding, ampersands will be featured throughout and we will have sprinkles of color throughout the wedding (and probably even the small sugar confections).

So there, it is. Our theme is love & sprinkles. It may not make much sense to people now but I’m hoping it’ll be very clear at the wedding.

Do you have an obvious theme for your wedding? Or did you have to create your own theme name like we did?

What’s a newly engaged girl to do? Bombard Pinterest, obviously!

Wait, rewind. Who am I kidding? I had a wedding board BEFORE I was engaged. (Don’t we all?) But having the board was different now, just like the idea of the proposal became more real once I knew the ring was purchased.

My Pinterest wedding board quickly grew in size, doubled, tripled, quadrupled. So much, that I needed to make my one board into different categorized boards. (In case you are wondering, I separated the pins into these categories: General, Planning, Bridal Party, Parties, Printed/Signage, Decor/Flowers, Ceremony, Reception, Technology, Details, Pop Inspiration, Honeymoon. I also made a Groom Not Welcome board to which I pinned dress and hairstyles and made sure Mr. K isn’t following that board.)

Some of my first pieces of inspiration were: 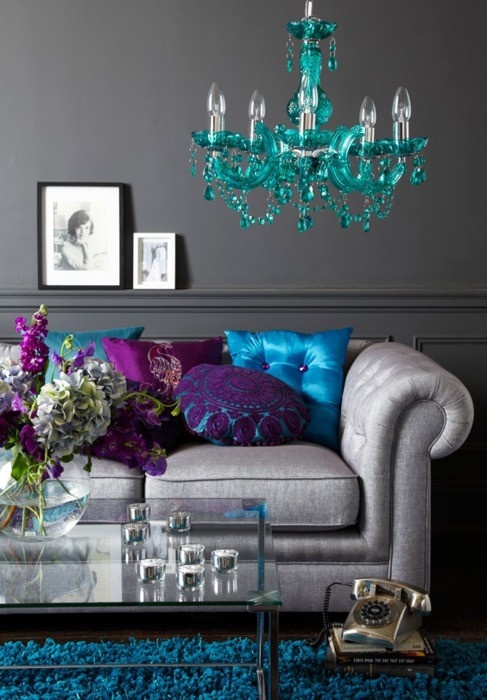 The gray. The jewel tones. To die for! // Source: Polyvore 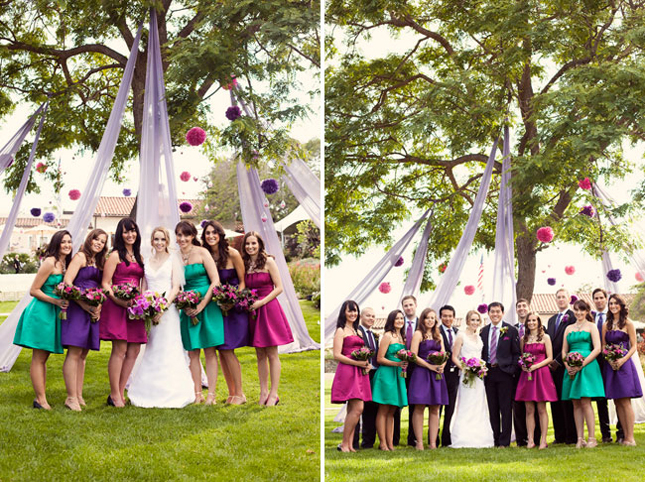 I love the gray suits and white sneakers – dressed up but with a flair of casual. // Source: Utah Bride Blog

A child at heart, I have always loved rainbow sprinkles. Love the fun and whimsy they can add to a wedding! // Source: StoryBoardWedding

Ampersands have a special place in my heart thanks to my love affair with the English language. // Source: Kimberly Jarman Photography Mr. PB and I are both big sports fans so I definitely love the idea of adding jersey shirts and other sports type things into the wedding mix. // Source: Devon J 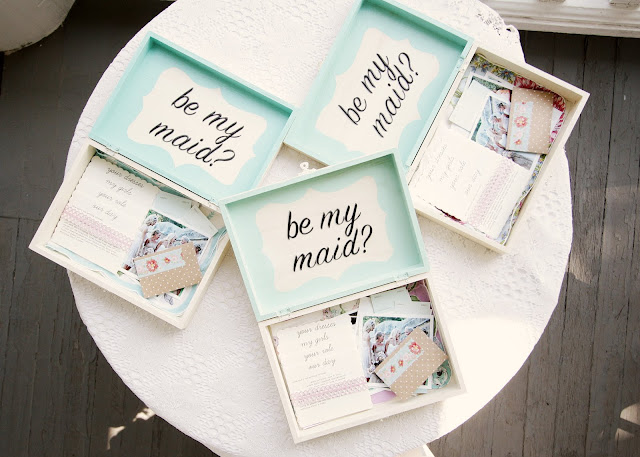 I love giving gifts so what better way to ask my ‘maids than with a box full of goodies. // Source: Rinse.Repeat.

Did you find your early inspiration from Pinterest? Anyone else have a wedding board (or multiple boards) before they were engaged?

In my fantasy wedding planning, the color scheme always changed. It was red and black for a while and then once I went to college, I liked the idea of blue and white – my alma mater’s colors. Once again, I was pulled into reality when I realized it was time to really pick a color scheme.

As I thought about colors, I realized that I have always gravitated towards jewel tones. Shades of purple, pink, blue and teal were always the first crayons I’d pick out of the 64-count Crayola box. (Violet, wild strawberry, cerulean and jungle green, to be exact.) The majority of my wardrobe is one of those four, bold colors. I feel like it may be a result of me being a product of the 80s and therefore a fan of early 90s television.

While the fashion didn’t stick with me, the colors sure did. // Sources: Throwback Kingdom, Kate Colored Glasses, Ashley the Fashion Guru; Edited by Me

Growing up, I also watched Beauty and the Beast a lot. Like a lot, A LOT. (Maybe you noticed one of our cats is named after the book-loving, open-minded, patient-hearted brunette heroine.)  On top of loving the characters, the story line, the songs and everything else about the movie, I really loved the beginning and the beautiful colors of the stained glass windows. Maybe I can install one just like this in my mansion when I win the lottery. // Source: Disney Princess Palace

As you can tell, the jewel tones were ingrained into my brain from a young age. I suggested the color combo to Mr. PB and with no hesitation he approved. Whoohoo! He liked the idea of multiple colors and agreed it would help brighten things up. So there you have it, the wedding color scheme:

My pretties. // Source: Me and my Photoshop skills

What helped dictate your color scheme? Have the colors been something you’ve gravitated towards for a while?