Archive for the ‘Nice to Meet You’ Category

The Fast and the Furriest

As foreshadowed in my previous post, Mr. PB and I moved quickly once we saw past our inaccurate perceptions of each other. From the Jedi mind trick to us going out for the first time to then becoming FBO (Facebook Official) to us sharing our love with each other, it was only 16 days. Mr. PB even jokingly brought up us going to Vegas and getting married before we were even FBO. Both of us weren’t shy with how we felt and neither of us were afraid to move the relationship further.

So after four months of being together (and just about as many sleepovers), we decided to start looking for our own place. By February 2011, we were moving into our own townhouse together.

Looking back, I’ll definitely say rain on a moving day is good luck, too! // Source: Facebook/Paint

After getting adjusted to living together for just six months, our family doubled. 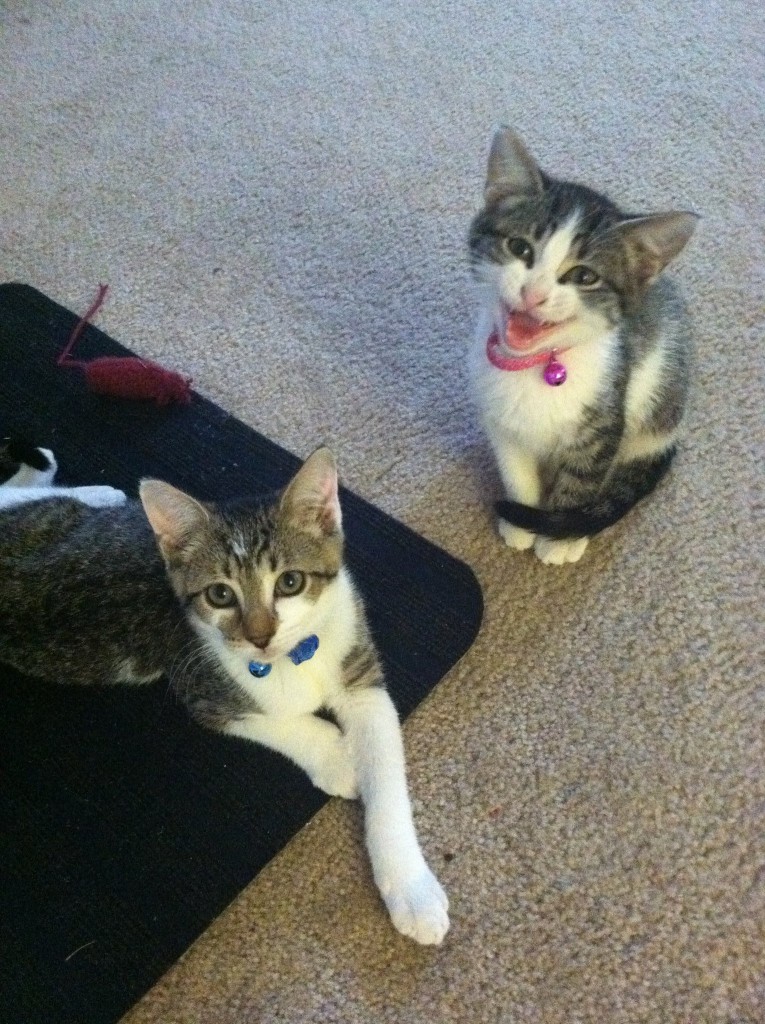 Mr. PB and I decided to adopt two kitties from our local Humane Society shelter, Lollypop Farm. They’re truly our babies and we may talk to them like they’re humans (but you don’t have any proof of that!). The kitties have grown since the above photo and so has our love for them. I wasn’t much of a cat person before we adopted the brother and sister duo but now I can’t imagine my life without these fur babies.

For those keeping score at home, that’s 11 months, a townhouse, two cats and a partridge in a pear tree. (Okay, maybe not the last one.) Mr. K and I never really thought twice about our decisions and the speed we were doing them in. Even if others didn’t completely understand or agree with our actions or the swiftness of our choices, we knew deep down that it was what we wanted and felt most comfortable with.

Did you move quicker with your fiance than the “norm”? Did fur babies make their way into your relationship as well?

I’ve always loved cupcakes, individual portions of delicious cake and topped off with delightful frosting and sprinkles. I mean, really, how can someone NOT like cupcakes? (I actually know someone who doesn’t. It totally baffles me.)

Working in a call center allowed me an opportunity to feed the masses with the small yummy baked goods. I made cupcakes shortly after the wedding, brought them into work and somehow Frack’s now brother-in-law, Mr. PB, got his paws on one. He probably snagged one seeing Frack and I sat next to each other.

At some point, Mr. PB and I became friends on Facebook and started following each other on Twitter. Memory is sort of fuzzy but it happened. Anyways, neither here nor there but a couple of weeks after the wedding, Mr. PB tweeted at me:

My cupcakes bring all boys to the yard. I could teach you but I’d have to charge. // Source: Twitter/Photoshop

Shortly after that, I obliged and make some cupcakes. I even recall using Hannah Montana cupcake liners for the Funfetti treats. Being the nice person I am, I of course brought some to work for Mr. PB. He later texted me appreciation for the treats and that was that.

A couple of weeks go by and a tweet from Mr. PB caught my attention. Being the sports fan and trash talker that I am, I had to reply. 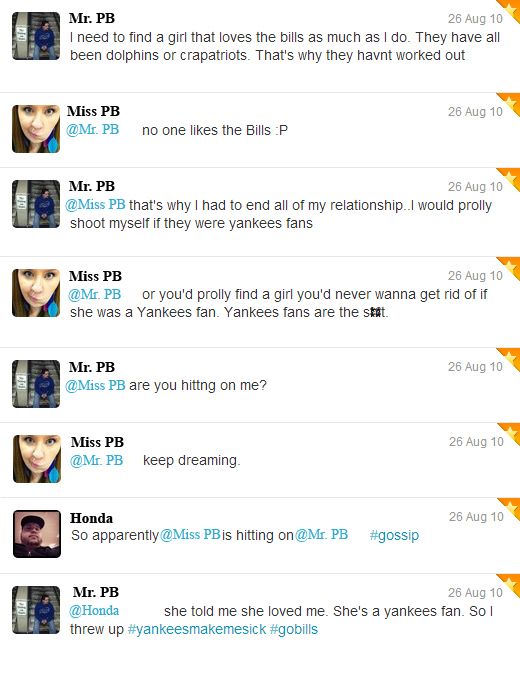 Honda uses these tweets as proof he called the relationship before anyone else.  // Source: Twitter/Photoshop

Just a day after that Twitter exchange, Mr. PB and I had a convo via text that included him performing a Jedi mind trick on me and completely changing the tone of the conversation we were having. Out of the blue, Mr. PB referenced me being the kind of girl he would want to be in a relationship with. After my brain spazzing out for a few moments, I continued down the path he was going. (He later said that the comment was only a joke but deep down, we both know it was the truth.) Mr. PB and I continued to chat via text for quite a while that night and ended up with completely different perspectives of each other. Gone was my perception of him, that he was an immature jerk who was perpetually annoyed with me. He no longer saw me as some annoying girl who thought she knew more about sports than she does. We both opened our minds and eyes up to something we didn’t see before.

Our first date was in the first week of September, we started dating during the second week and just four days later, I took the plunge and told him I loved him. And the rest, they say, is our story.

Did you find love in an unexpected place? Did your baking skills or social media play a role in getting a significant other’s attention?

I was sure that Mr. Right was never to be found, that I’d be an old spinster and hoarder, alone forever. Fortunately, that was not in the cards for me. How I got to Mr. Right is a long, complicated story. So I’ll break it down into digestible parts for you…

I moved back home in 2009 after living in two states in two years. My return home due to a mix of missing my family, a lack of job opportunities in the field I wanted and a bit of uncertainty surrounding where exactly I wanted my life to go.

My resume was filled with a mix of customer service and communication experience. Knowing that bills wouldn’t just stop once I moved home, I applied to basically any job I was qualified for and ended up accepting a job in a call center for a wireless provider. I walked into the job orientation and recognized someone from my high school. I couldn’t place her name but I knew I had definitely seen her around the school. We got to chatting and a friendship was immediately born. People in our training class even started calling us Frick (me) and Frack (her). Turns out Frack was recently engaged, which matched up perfectly with me being an OCD aspiring wedding planner.

The World Series came a couple of months into the job. I kept noticing this guy who had a lot of Yankees items on his desk and wore NYY gear quite often. The sports-loving lady inside of me couldn’t help but flirt. And flirt. And flirt. So much that the guys around him starting heckling me each time I’d visit his desk (like every day). I’m pretty sure some of them even started referring to me as his girlfriend. I later found out that one of those hecklers was actually Frack’s future brother-in-law. He definitely was a jerk and kind of pompous, always cutting me off whenever I’d try to talk about sports.

Time passes, nothing happens with Yankee boy and Frack’s wedding to Gee is two days away. I help set up at the venue and Gee’s brother shows up and does basically nothing while he’s there. I even tried to stir up convo with him seeing he was wearing a Buffalo Bulls shirt, my alma mater. Nope, nothing. Jerk.

The Gee and Frack wedding comes, totes amazeballs, and at the reception, a drink… or two… or 10 too many are consumed by yours truly. Rumor has it that this girl may have cried in the bathroom to the bride’s and groom’s mothers. (Not my proudest moment but I say it didn’t happen if I don’t remember it.)

Gee, Frack and Me – after the I dos and before the ‘oh no she didn’t!’ // Personal Photo

Well anyways, I apologize about a billion times afterwards to Frack and she assures me everything is fine. What’s a girl to do about life when she’s down? Bake cupcakes, obv.

Posted in Let's Be Real, Nice to Meet You, When the Knot is Tied | No Comments »

(did you just read that in the Mrs. Doubtfire voice? I hope so, because that’s the voice I wrote it in)

Hello friend. First off, let me say that you look mighty fabulous right now. You may be thinking “But Jen, I’m in sweatpants, a stained shirt and mismatched socks.” Ya know what I say? Fab-u-lous!

Anyways, we can’t officially be friends until you know a little about me, I suppose.

So now that you know all that, we’re practically BFF. Maybe we can get one of those old school half-heart necklaces. Only if I get the Be Fri half, you can have st ends.

I hope to update this blog pretty frequently, rotating between topics and whatever is on my mind. Feel free to check back (often).

Posted in Let's Be Real, Nice to Meet You | No Comments »